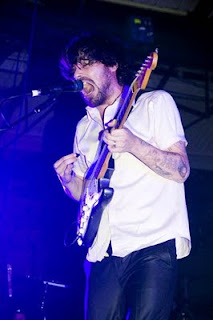 THE cavernous interior of St George’s Market, packed with scene kids, fashionistas, a smattering of metalheads and a dash of rockers is testimony to the journey Biffy Clyro have made in recent years.


From club alt rockers to potential stadium busters the ‘Biffy’ are progressing the old-fashioned way – evolving their sound on albums and then honing it to a keen edge through touring. Not for them the hollow half minute of fame on shit factor or other such tawdry Saturday night numpty tv.

That evolution still awaits Atlanta’s Manchester Orchestra. Their proto-metal, mixed with Weezer-style geekiness and the post-grunge Soundgarden guitar sound still needs refining. Having said that, those not distracted by burger stands and bar tabs, gave them a warm enough welcome.

The welcome for the Biffy was that usually only afforded to hometown acts. It is a strange kind of devotion that can bond such a diverse audience .

The set owed much to ‘Puzzle’ – not a surprise given that new platter ‘Only Revolutions’ has yet to hit the racks.

Morose lyrics from Puzzle are translated live into life-affirming anthems. 'Living is a Problem Because Everything Dies' has become in two years a defiant chant against fatalism, while ‘Who’s Got A Match’ becomes a shout in the face of cliché.

New tracks Bubbles and The Captain have yet to settle fully into the set, but they potentially display a new style of dynamism from the band.

Simon Neill’s manic guitar work, crouched over his highly hung Fender and highly strung vocals, is ever more tightly woven into James and Ben’s backing. At times in the past there was a tendency of crowds to fixate on Simon’s antics, but in Belfast the band’s internal workings were displayed as fierce unit. Three vocalists, one rhythm, one purpose.

But, their real skill lies in knowing how to use crescendos. Within each song there are moments when pace fades, only to be quickly picked up again; when orchestration gives way to heavy, blustering guitar.

Equally the impressive stage set was used to build the sense of occasion. What appeared at first as semi-industrial struts echoing Scottish heavy industry glowed as the set progressed with subtlety and intensity in balanced doses.

By the time 'Mountain' closed the set Biffy Clyro had raised the temperature and the pitch of audience devotion. The burger stand and the bar were forgotten fixtures; hands were raised, voices strained and the Scottish minstrels of mayhem closed in a crescendo of musical majesty. 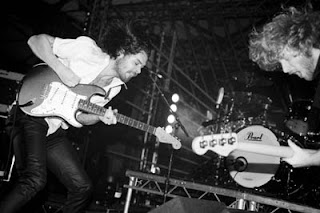