HAILING from deepest darkest Dublin, Stillroom have been knocking around the scene for a good few years, honing and refining their brand of hook infused hard rock. And now finally on Good To Be Alive they have an album that combines all the elements of their take on rock 'n' feckin' roll.

This is a poised and well balanced release - no need to beat about the bush - and this group of friends have delivered.

It has been five years since their début release - the ep A Lick and A Promise - and therefore this set of songs has been long overdue for listeners. For those that wonder about Stillroom's rock groove's success, don't forget they've had a song ('Your Love') used in a Microsoft ad campaign and have had songs used in feature films.

Therefore there is a lot of expectation with Good To Be Alive...

James uses his languid and effective power to great effect, particularly on the power balladish 'The Wake', while Scottie and Dehna keep the guitar lines flowing, with some of Scottie's tight solos well worth a listen.

However, the core of the band's sound lies with John (bass) and Dave (drums), particularly notable on 'That's What You Get''.

Overall this is nothing short of enjoyable hard rock, with radio-friendly sensibilities in the hooks and riffs. That is not a criticism, it is instead a compliment: the many AM stations and sat-radio stations in the US will lap this up. 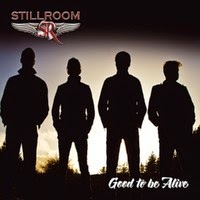 'Now You're Gone' is the perfect example, with an opening riff that has a dirt-edged tone, before the vocal line delves into pop tones, before focussing on a chorus underpinned by guitar's rolling through runs and riffs.

The band also are acutely aware of pacing and arrangement, slowing things down at the right times on 'Now You're Gone' and the stand-out track on the album 'Beautiful Bitch'.

Arranging a good hard rock song is not as easy as some people assume - the mid-paced stomp of 'All Flash' is a track that could have descended into cliché, but by measuring the tempo and lyrical wit they have produced a song many a headlining band in the US or these isles would be proud to release.

The bluesy touches on 'Keep on Walking' demonstrates the versatility of Stillroom, with James once again delivering a fine vocal style while the band develop the track with the balance of restraint and flourish at just the right level.

Stillroom are long overdue taking their place in the pantheon of hard rockers at the minute: on Good To Be Alive they have produced a life affirming album that will have fans of the genre raising a glass and pumping a fist, which is all you can hope for.
Posted by Jonny at 7:19 pm