Masterful Scots Man Must Die nail it on their latest release

IF you like crushing, technically superior death metal, with its roots in classic metal, and with a dystopian view of current affairs and tormented hatred at betrayals then you need not look further than Man  Must Die.

The Scottish technocrats of controlled chaos platter, Peace Was Never An Option, is currently available on Grindscene Records and is a furious expression of death metal as a cause for cathartic celebration in anger.

Throughout this album there is a flavour of finesse to the musicianship as can be heard on some of the guitar work on The Hell I Fear, which also has a clean, spoken section that serves to focus the menace of the song and a coda that works to close the song in a manner appropriate to concluding such a fierce psalm.

It would be pretty much easy to pick out individual tracks on Peace Was Never An Option as there is not a weak song. Indeed, what this album shows is that the genre of death metal need not be a straightjacket. The so-called formula for death metal can be tweaked - just a little - and the result is a more rounded experience.

The album title comes from a song whose lyrical theme resonates in Northern Ireland and Glasgow - it is simply called Sectarian. A double bass rumble powers through the track, while guitars and base weave around the angry refutation of the sectarian culture that divides us.

Lines such as: "Why don't you open your eyes; this is destroying your life" and "You are shaped by your elder's flaws" show the passion expressed in this track. 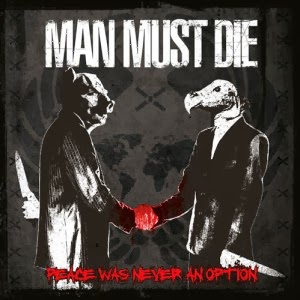 To help listeners take a breath there is the instrumental Dissolution sitting midway through this 12- track triumphant march through hellish metal.

Despite the liberal theme of Sectarian, there is a reactionary lyric in the tearaway Abuser Friendly, which casts a cynical eye on the 'rights' of offenders - the only uncomfortable moment on then album as a point that can be made with some validity, it also strays a little close to 'Daily Mail' territory.

But it is least a eloquent expression of anger. And, there lies the secret of the album's power. Against the death metal drive there is intelligence on show;  the musical prowess is a counterpoint to the intelligibly presented vocals. This is given full rein on  Absence Makes The Heart Grows Stronger and The Price You Pay.

The eight and a half minute closer The Day That I Died is the distillation of the album's theme using an alchemy that pulls together a mid-paced track backed by drum flourishes, controlled guitar expressions and a sense of timing that few have met in recent years.

Peace Was Never An Option is out now on Grindscene Records and with our 8.5 out of 10 rating we suggest you invest in Man Must Die.
Posted by Jonny at 4:43 pm

Email ThisBlogThis!Share to TwitterShare to FacebookShare to Pinterest
Labels: Grindscene Records, Man Must Die, Peace Was Never An Option, Sectarian