No delusions at SAHG's grandeur with album number four

WHEN SAHG played in front of a thin crowd in Belfast earlier in 2013 there was no doubt about their pedigree as performers, and now with their fourth album, Delusions of Grandeur they have reinforced their credentials as an increasingly impressive act.

While not an immediately accessible album, it is, however, one with impressive depth in song structure, delivery and intensity; all the tricks in the classic metal bag are teased out to construct an album worthy of the title 'classic'.

From opener Slip Off The Edge of The Universe to the epic closer Sleeper's Gate to The Galaxy there is a sense of the monumental about this release.

However, part of the secret lies in the two-and-a-half minute instrumental, Odium Delerium. Here, the riffs and guitar work are a seamless blend of the best of 70s heavy music á la Sabbath and Zep, and more modern work like that of Mastodon. It's not just because this is what the band claim in the release blurb; it is evident to any listener that this is a Norwegian act that is both knowledgeable about the past, but able to put their own spin on it.

While Sleeper's Gate may have echoes of Opeth and Zep III, it also twists this into a spaced out conclusion to the album's concept.

Concept album? Don't run away in fear! Each song stands on its own merits. The stomp of Firechild, the full on Blizzardzone or Then Wakens the Beast could fit into a set list and not seem out of place.

The concept is one best explained by front man Olav Iversen: 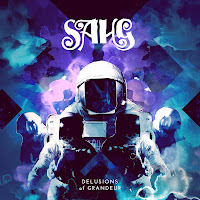 “We came up with the story about a person, whose delusions of grandeur escalate to the level where they consume him completely,” he said.

“From becoming increasingly psychopathic and dominant, he loses touch with everyone around him, and isolates into his own imaginary, psychotic world, where he becomes the almighty ruler of the universe.

"As he stands on the highest peak of his domain and beholds all that he has conquered, he suddenly slips off the edge and floats away, weightless. Helpless and stripped of all power, he drifts further into the open space, until he disappears into the darkness.

"It’s an album about how desire for power and property can distort and destroy who we are.”

Got that? Yes, it might seem to have a little bit of Floyd's Wall about the rise and decline, without the pretentiousness of fans regard for that. Instead, one must take this to reflect what it must be like to be in the creative furnace of Bergen and watch lesser bands rise to the front pages of magazines with mediocre albums and overblown egos. Very few last the course.

SAHG on the other hand are based on solid musicianship, a background of its member's experience in playing everything to classic hard rock to death/black metal. That experience has been used to produce a musical journey in Delusions of Grandeur that is as complete a space opera as any sci-fi film produced since Alien.

From within the realm of science fiction one can explore themes and metaphors that in straight forward lyrics would appear clumsy. Politicians and demagogues, as well as musos would do well to pay heed to he essential message: rise to the top and often there is nothing there of worth.

But set aside everything else, and what SAHG have delivered is an impressive, classic album. The twin guitars of Olav and Thomas Tofthagen are a dexterous melange of wondrousness, while Tony Vetaas and
Thomas Lønnheim nail the complexity down with a precision that does not intrude, but instead complements the vision of each song and the album overall.

What really makes Delusions of Grandeur stand apart from the herd of schtick produced by the wannabes is that even after a few listens you know this is an album you will come back to a month down the line, a year down the line, or five years down the line and it will still feel as fresh and as impressive.