NORTHERN Ireland churns out more great hard rock than is credible for its relatievely small population in rock and metal demographics. Indeed, if you were to listen to the mainstream you'd be forgiven for thinking that apart from a clutch of shoegazers and The Undertones, hard rock is an aberration that now and again raises its long-haired face and tattooed arms above the surface.


How wrong the self-congratulatory pundits are! Proving the quiffed and stylish commentators wrong happens so often that they look uncomfortably around when the likes of The Answer, Therapy?, or any other given quota or metal, rock or punk emerges. Naturally they then claim that they backed and 'discovered' these bands.

At some stage in coming months they will be forced to look at their playlists and note down another few facts from Wikipedia before claiming they knew Trucker Diablo were great all along.

You see Trucker Diablo have produced an album - The Devil Rhythm - that has the alchemist's touch for taking base rock and metal, adding a dash of southern groove and the sort of singalong choruses chart wannabes would trade their latest boob implant to have.

The Devil Rhythm is a thing of beauty, sleazy, noisy beauty. The sort of beauty that can be enjoyed driving too fast, or with a beer in hand, but best of all un-selfconsciouslessly punching the air and unashamedly roaring along to the choruses. Try Big Truck, for example. I defy anyone with a little hard rock heritage in their humble hearts not to find themselves trying desparately to get that chorus out of their heads! 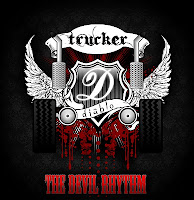 Rarely do bands emerge complete from the ether. Trucker Diablo have an impressive pedigree. Google the bands Joyrider and Titled to understand where the line-up components of Simon Haddock, (Joyrider) Tom Harte and Terry Crawford (Tilted) have been baptised in recording and touring. The heart of Trucker Diablo (with Glenn Harrison completing the line-up) lies in earning their stripes.

But with that heard earned experience many acts would become wistful, occassionally whingeing on about how the 90s was the wrong decade, etc, etc. Instead Trucker Diablo have produced a set of tunes that are the feelgood antithesis for every self-obsessed act out there. When they sing Dirty Love its with the sort of joy that should permeate all good music. The dark grooves of Never Too Late to Sin tempt the wayward back to the bottle, back to the sweaty excellence of hard rock.

Black and Blue is a great cathartic tale of excess of every kind, while Rattlehead has the sort of rockin' blues that ZZ Top used to produce.

Standing out in the track selection are the single Juggernaut with its towering hooks and riffs that burrow into memory; and the album opener, Drink Beer, Destroy. Shurely shome kinda anthem for Norn Iron rock!

There is an easy option for many bands - that is to re-tread sounds, add a new look and claim to be the best thing since a sliced loaf of Ormeau Veda as buttered as a hangover cure. However, this is a trick that cannot achieved in the rock genre. As John Cougar once said, it's just arranging the chords, but as Trucker Diablo and the growing wave of Northern Ireland's quality rock and metal proves, it is how you play those chords, tease out the hooks and tear off the solos that matter.

Trucker Diablo's The Devil Rhythm - raise the glass, punch the air, and most of all enjoy!
Posted by Jonny at 11:35 pm