ALBUM REVIEW: 'Ware the icy lands of Antartarctica for Evil Scarecrow tread the wastelands and conquer

REMEMBER the Martian invasion of 2017? When the so-called lifeless planet unleashed their warriors on an unsuspecting Earth? No neither do we, but Evil Scarecrow have that memory burned deep and they seek vengeance.

And, whilst we have never encountered an ice slug that shoots frozen milk Dr Rabid Hell and his accomplices assure us that one exists...

If ya eejits expected us to be 'serious' when reviewing Evil Scarecrow's fourth album, well that was not ever going to happen. But, 'Chapter IV: Antartarctica for all its twisted humour is a serious piece of wondrous musicality amidst the madness. 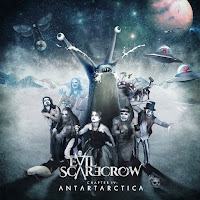 Within we find a panopoly of demented parables, warnings of not just the Martian invasion ('Red Riding Hood') but stark warnings..

Let the fear be upon you!

'Ware the deadly vortices of the 'Hurricanado'.

Heed the warnings of haunting by the 'Polterghost' lest ye have spaghetti chucked at you.

And, as for the Turnip King...more later.

The outside world prefer to think of 'metal' as silly. Well Evil Scarecrow have 10 high concept tracks on Chapter IV: Antartarctica that are sillier than a silly thing romping in a field of silliness while channelling Monty Python, Black Metal, Mercyful Fate, thrash, prog and American Dad.

And, that is no bad thing.

However, for all the gigglicious lyrics this is a serious chunk of an album. On all 10 tracks Dr Rabid Hell (vocals, guitars), Brother Dimitri Pain (guitars), Kraven Morrdeth (bass), Princess Luxury (keyboards), and Ringmaster Monty Blitzfist (drums) lay down the proverbial chops - although we are yet to receive our delivery of the delicious pig flesh to accompany our listening pleasure...

It is the understanding that Evil Scarecrow have that amidst the insanity the playing has to be spot on, while keeping a straight face while delivering songs that are, well only Evil Scarecrow can deliver this high concept tales...

Take the aforementioned root vegetable lord... Gus, Zag and The Turnip King' is a cautionary tale of unwitting Satanist trying to summon the evil one and bringing forth the Turnip King instead, wreaking havoc.

And, there is also the 'Cosmic Goth Moth Gong', which you should only experience after six or 10 beers or a mind-altering substance to really understand.

Taking their cues from black metal, thrash, understanding their influences and twisting them...and throwing in a folk track.

Yes, the penultimate track is the plaintive tale - 'The Ballad of Brother Pain' - take note folk metal wannabes because this tear-jerking 'power ballad'. And, we must know why the monk went to Antartarctica, does his mother know where he is and why walk the frozen tracts in open sandals?

However, what is striking is the titular closer Antartarctica - complete with a child's bike horn at the opening, a nod to the video of Hurricanado. This 10-minute epic has it all. A sweep and a vision that takes Opeth and Mastodon and gives them the icicle treatment in a melange that melds mind-bending concepts.

Across all tracks Evil Scarecrow do not put a foot wrong. And, if you fail to grasp this understand that "It is too complex for the human mind..."


Chapter IV: Antartarctica is released on 28th September on Dead Box. It is available on a variety of formats, including vinyl on Pledge and can also be accessed via an interdimensional portal just outside Coventry. 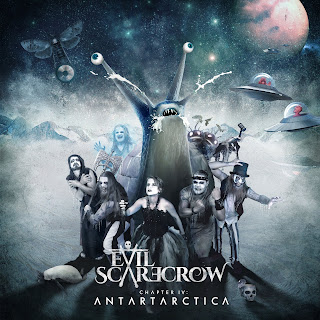