ON U.D.O.'s new album, 'Steelfactory' you would expect it to carr you along the expected metal journey, but the veteran singer also invites us into something else - not just the passion, but the introspection of being a rock 'n' roll veteran on the closing tack 'The Way'.

Mr Dirkschneider has such a venerable career that another album would have been received with accolades, no matte what. And, while 'Steelfactory' contains no surprises you wouldn't want UDO to deliver a fucking nu-metal album. 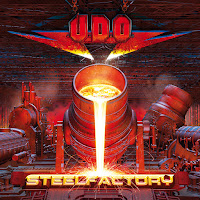 What you get is a straightforward, no nonsense, heavy metal album, tempered by the revelatory 'ballad' of 'The Way'.

In many ways this AFM Records/Soulfood Music release captures the essence of what makes a great 'classic' metal album. All bar two of the 15 tracks clock in at around four minutes: the majority have a mid-tempo menace; and, for all the power there is an inherent melody.

The self-styled 'German Metal Tank' has the ability to deliver effortlessly on songs such as 'Rose In The Desert' and the frenetic 'Eraser'.

Of course, these days U.D.O. have a settled line-up: from his son Sven on drums - ably aided by Fitty Wienhold on bass - through to the excellence of Andry Smirnov' guitar work.

On the second song, 'Make The Move', in particular Smirnov's work jousts with UDO's words, playing each note in an almost lyrical fashion.

And, Smirnov's contribution is a key facet that producer Jacob Hansen has developed. Yes, UDO has the sort of voice that was designed for heavy metal, but the entire record's aesthetic stands with.

True, 'Steelfactory' isn't going to re-define the genre, nor will it change the future of metal - but you know what? We don't give a single flying fuck. Just listen to 'In The Heat Of The Night' and revel in its delivery and excellence - even the FX are restrained.

But the subsequent track 'Raise The Game' should have a trademark on it!

However, the core of this album is 'Hungry And Angry'. Sure, non-metal people may scoff, but yes "we are still hungry and angry'. That said, 'One Heart, One Soul' is almost the epitome of what UDO does.

All the tracks are as close to the alchemist's stone that can be achieved in metal.

Maybe it is an age-thing, but 'Steelfactory' seems to us to have that bit of class that dictates it shall be on repeat for a long, long time to come. And, the doubters can fuck away off because UDO is one of that rare breed that just does it and does it fucking well. This really is 'The Way'...

Steelfactory is released on AFM Records and Soulfood Music on August 31st. 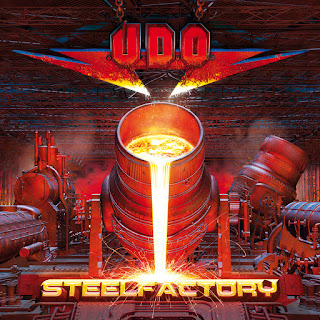