UGLY Kid Joe will celebrate the 25th anniversary of their 'America's Least Wanted' album with a Belfast show at The Limelight 1 on Tuesday 04th September 2018.

The band will perform the album in its entirety with main support from Haggard Cat, while Yellowcake will open proceedings.

The latter song also made it to No. 11 on the Top 40 Mainstream. As of 1995, the album has been certified double platinum.

Tickets, priced £15 (+ booking fee) are on sale this Friday, July 6th from all usual outlets. 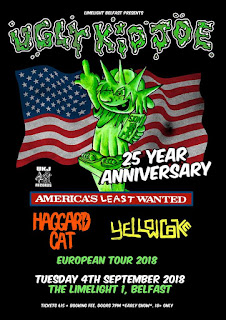