Later that same evening I had the privilege, together with my son, to see another legend in the shape of ex-Guns ‘n’ Roses bassist Duff McKagan deliver another solid, stonking set at the Spring and Airbrake with his current touring outfit Loaded. These two legends are worthy of the status in a world where hyperbole is the norm and every numptie who can play two or three chords is given a wow factor.

Attending the Northern Ireland Music Awards was a mixed blessing – the chance to see SLF again being uppermost. But while one must accord congratulations to AU, Oh Yeah and Belfast City Council for organising the event, I was left feeling very much confused for what the mainstream passes off for music. Is it just me? Am I getting too old? But all bar And So I Watched You From Afar left me cold, and for large parts bored.

General Fiasco are an obvious favourite amongst the many teenagers and twentysomethings in the crowd, but even my son was bored by what was a performance that seemed to me to lack depth. Wearing ties and looking like they had just come out of a prep school party.

As for Cashier No. 9...well it was difficult to tell whether they were Byrds wannabes, or some sort of take on reviving the eclecticism of the 60s and 80s. Dogged by technical problems (errr guys even if everything goes down sing something! Or rehearse properly with your gear!) they left in a huff after two songs.


Returning after some much needed refreshment we came across what seemed to be a distorted guitar riff...only to find it was a sample – The Japanese Popstars where on stage. Ohh dear me, Satan must be reserving a very special place in hell for people who ‘perform’ with a couple of samplers and their Apple Mac laptops open. Sure they can mix other people’s music and add yet more samples of other people’s music and other people’s music (getting the theme here) what’s the point. Go programme computer games soundtracks or play Call of Duty, but don’t pass it off as a performance. If you can’t write music... 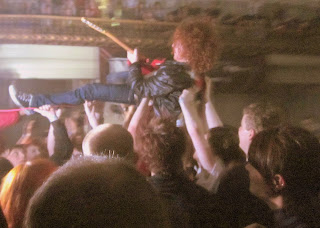 Is it just me? Am I getting too old?

Salvation was at hand however. Having no real live experience of And So I Watch You From Afar it was a delight to have an edgy, over the top instrumental wall of guitars, bass and drums: the bastard child of alt rock and Mastodon, there was something electric on stage. And for a change it was no faux angst. Tony announced he was leaving ASIWYFA before diving into the crowd. Due adulation, ecstatic scenes among the appreciative and the thrown down guitar... One cannot tell what the future is for ASIWYFA and Tony, but well worth tracking it down.

Radio Ulster’s Rigsy and Emma Fitzpatrick of Citybeat did an admirable job as hosting the event, but special mention must go to Stuart Bailie for organising it, and for Belfast City Council for being so open to Northern Ireland music for being among the backers (can’t figure out the Invest Northern Ireland link, but hey perhaps local bands should be applying for a special rock grant!). 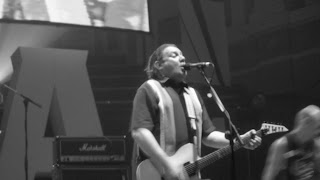 BBC Northern Ireland’s Mike Edgar gave a glowing accolade to SLF, complete with a video charting their history (and some fashion mistakes). But what can you really say. Off stage they could be a group of middle aged men gathered round for a natter and wee bit of craic. But onstage there is a fire and an intensity that few can match even when they are only there for a 20-minute blast through.

Suspect Device, Strummerville, Wasted Life - all delivered like the fury of the late 70s and early 80s was still burning in Jake Burns heart. And with a new – long-awaited album follow-up to Guitar and Drum promised one can only see the Stiffs go from strength to strength.

This is beginning to read like a GCSE attempt at a review rather than a serious journalistic analysis, but what the hell: 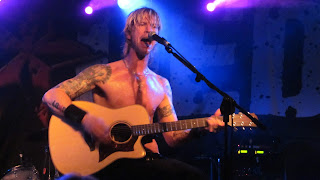 With the final chords of Alternative Ulster echoing it was a quick dash to the Spring and Airbrake, thanks to the kind folks at CDC Leisure, to catch the last half of Duff McKagan’s Loaded. Laconic, every bit the Californian superstar punk, heavy rock icon, Duff’s set was almost like he was the resident act for the venue. Chatting to the front row as if with old friends.

But make no mistake about it; this is not a man on nostalgia trip. Yes the Gunner’s It’s So Easy was punched out to the crowd’s delight, while Attitude summed up a lot about the man. The acoustic version of Wasted Heart, however, showed that this is a man and a band prepared to see what comes next rather than resting on past glories.

So, why in the world did it take so long for SLF to be accorded Legends status? Why was the Spring and Airbrake not rammed to the rafters for Duff? And why was local hard rock and metal talent not received accolades and awards in the Ulster Hall? Trucker Diablo, Last Known Addiction, Million Dollar Reload, Worldsend etc etc etc may have small flaws each, but those flaws are tiny, minuscule compared to the flawed fashionable ones.

I posit two reasons: first, fashions fickle fingers swaying from the arms of the playlists of BBC, (un)Cool FM and Citybeat and the pages of AU. The second one is related, but all the more serious: airplay.

The rock and metal scene exists despite being blacklisted from the radio stations and print media. With the right airplay on mainstream stations I have no doubt that hard rock venues and album sales would enjoy a resurgence. Mime-along acts enjoy their allotted scandal rag half hour of fame and sell-out the Odyssey for their pre-pubescent fantasist girls and their mums, but the conversion of the 12,000+ that went to Iron Maiden and Metallica in the Odyssey from weekend rockers to regular attendees for local acts is but an airplay step away. One can but dream that next year’s Northern Ireland Music Awards will offer due recognition to hard rock and metal acts, and SLF get another Legends award, to paraphrase a certain cosmetic advertisement: Because They’re Worth It!