Fuckers can fuck off


A big thanks to the three wee fuckers that spoiled my weekend in too many ways to mention by kicking the shit out of me on the way home. Yep, they decided that there was a game played by spides called stick the metalhead. I decided not to play that game and after kicking out at scrote with knife they were most annoyed and decided to kick the metalhead instead. Well, can't say that I gave as good as I got against three...but at least one will be limping for a very long time :) a very long time!

Here's the bake they left me with: 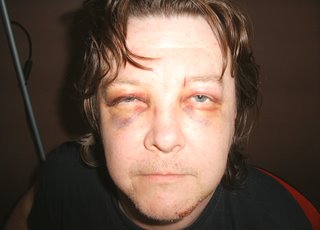 Please tell me that you reported this to the fed's and have been to see a solicitor as well. Where there any cctv camera's about that area that might have got it on tape ??

it almost happened to me before johnny, but steeks and spides are what they are and soon regretted it when i found them on their own... then they really did shit themselves and now when i pass them i get a nice we hello.

steeks and spides are fuckers and always will be thats why when one opens their mouth to you, armed or not, you shut it for them... no questions.

how are you now?

Thanks Colin and 'Slinger for your messages of support, and to everyone who offered support and synpathy as well as laughter. And can I once and for all deny that I got the kicking in a failed attempt to join Lordi in time for Eurovision...they said my bake would have frightened the judges a little more than the devil wings :)

Jayus man, that's terrible. Hope you're alright and I hope the stinky feckers are caught. Take it easy.

Dude, seriously...that blows. Glad you got at least one of the little bastards. And now that the weather's getting better, I HATE walking through the city where all the little fuckers have been drunk since 3 in the afternoon.