TOM Reynolds a.k.a. Foul Body Autopsy is a force of nature. Vegan, polemicist, one man death metal destruction machine and someone who sees the world for the cesspool that it is.

Last time out on 'So Close to Dehumanization' FBA drove a knife through society's penchant for self-destruction via factory churned out meat products. This time out on 'Perpetuated by Greed' sees a simple message, in his own words: "The concept behind the new Foul Body Autopsy record is... Everything Is Completely Fucked!". 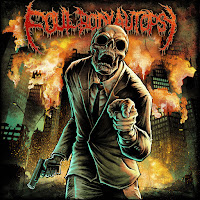 Leave aside the words for a moment to reflect on this death metal release...for example the 36-second track 'Devoid of Humanity' is a short, sharp kick to the temple; honed guitar, guttural roar. Napalm Death would be proud to have this in their set list. And, given the e.p. was recorded where NP lay down tracks (The Parlour Recording Studio) that is somewhat fitting.

But Foul Body Autopsy is not a clone of any band: it's not the fact that it is a one man band, instead it is the fury that this ep launches. Much like Cattle Decapitation's world view, but placed in the present, 'Perpetuated by Greed' sees a world marching on to its own self-destruction.

Tom explained: "It's a refection of how messed up the world is at the moment, and thanks to the right wing turn in politics and in the media a mood of fear and paranoia has taken hold. There are families drowning in the sea, running from the crossfire of blood thirsty extremist death cult and a desperate amoral military dictatorship, and instead of trying to help there are governments doing everything in their power to stop refugees getting to safety.

"As well as that, we have national newspapers here giving people, and someone in particular, space in their rag to call these affected people cockroaches! We have a Prime Minister who says that anyone that opposes war is a "terrorist sympathiser" and if we look across the pond things are not that much better... a man that looks like a biological car crash is running for president and most of the things he says are completely false but because most of his followers don't trust the media he can create his own insane reality and have thousands of people blindly agree with him. The future isn't looking too great." 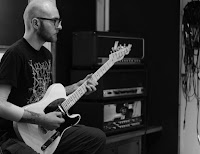 Opener and title track of the ep sets off with a sample then a wall of guitar white noise, before setting the tone of intensely satisfying riffs to support the cries of despair.

Throughout this short(ish) release Tom maintains a direct, angry approach with nice changes up, balanced deathly attack. Yes, this is what the genre splitters would dub 'blackened death grind' or some such labels, but in essence this is extreme metal how it should be played.

'Destabilized Perception' and closer 'Complete Environment Collapse' stand out on the release, with the latter the longest song on the release at an almost epic four minutes plus compared to the others.

The only minor point is that while the release has a complete feel, at times the drums sound a bit over-produced compared to the precise guitar sound.

Overall this is an ep guaranteed to challenge you both in terms of its message and its sound: its not easy listening at any level and that is a good thing in our book.