LET'S face it, we're getting a glut of thrash from bands new and old at the minute, with many pretenders throwing their hats into the ring. But some bands manage to keep that enthusiasm alive and kicking without compromising quality.

There may be nothing really new in using the thrash template, but Exumer have taken that tried and tested formula and re-ignited and resurrected enthusiasm in this old jaded hack with their latest album, 'The Raging Tides'.

To coin a phrase, with almost consummate ease they have released this pure thrash attack as a follow-up to 2012's 'Fire and Damnation' following their reformation in 2008. 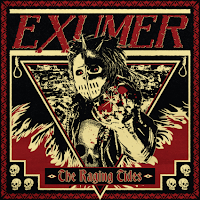 Their 'veteran' status is justly deserved, but the Teutonic rockers, also know not to dabble with a successful formula; just aim to take it up another notch.

Mark B and Ray Mensh riff and change time signatures as if they have metronomes on amphetamines, while Mem V attacks his bass and keeps the vocal lines solid.

'Welcome to Hellfire' and 'Sinister Souls', with the title track are three outstanding tracks amid and an album chock full of good thrash honesty.

However, it is also an album that sees the band tackle tough subjects.

Vocalist Mem V. Stein said he based the bulk of the record around human suffering. Specifically, he added it is suffering "caused by torture or other means for political, religious, or personal gain for the individuals/organizations who inflict the pain.

"The album is called "The Raging Tides", and the title represents the ebb and flow of human misery and despair around the globe. 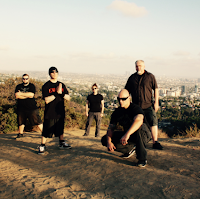 These topics are obviously not born from a vacuum, rather they are essentially a constant in daily lives in 2015, both by way of the modern 24 hour news cycle, and document leaks and controversy via wikileaks or figures like Edward Snowden.

Stein continues: "The lyrics I wrote were inspired by a wide range of books and articles I read, ranging from the investigation of tactics employed by the CIA, to Amnesty International reports on conditions in prisons (Song; Brand of Evil), and in Nigeria (extreme forms of human abuse - Song; Welcome to Hellfire). Specifics details aren't necessarily called out in the lyrics, rather the topics are clear for listeners who can read between the lines, so to speak. Another example is the track "Shadow Walker," that touches on those who leave promising lives to pursue radical ideologies and even death, only to be deceived by those they follow for larger political and personal goals."

To a certain extent these topics are the staple fare of thrash at its best, but there is no denying the passion in the delivery, nor the quality of the performances - Matthias Kasner's drums in particular are worthy of note.

Overall this is an album that will have thrash purists grinning from ear to ear - it may not manage to get other metal fans enthused, but if they catch Exumer live this summer they may find themselves caught in the Exumer mosh.