AFTER the success of last year's 15th Anniversary of The Distortion Project party, Mr James Loveday has announced DistortionFest 2016 - a 16th birthday show with 14 bands across the Limelight complex on 29th October

Headlining will be - all the way from the US of A, Warrior Soul.

Also appearing will be the awesome Lord Volture, as well as Bloodway from Romania and Valborg from Germany.

Confirmed local acts are Rabid Bitch Of The North and Zlatanera.

And there are eight, yes eight, more bands to be announced in a show that will kick off at 12:30pm and last until we all collapse.... 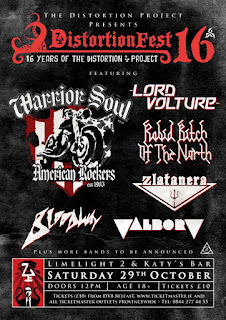