ALBUM REVIEW: Six Feet Under dig into the vaults for Graveyard Classics IV - The Number Of The Priest

A COVERS album. What's the fucking point, you've heard the songs before. Except when its a covers album by Six Feet Under.

Truth be told we never really 'got' the whole Graveyard Classic thing before. It was all well and good and a little entertaining. However, on number four they have nailed it impressively, Barnes practically losing it in an effort to extract each ounce of fun in his death metal delivery of 11 classics.

With the title 'Number of the Priest' it encompasses five Priest and six Maiden tracks, apparently picked by Metal Blade CEO, Brian Slagel. 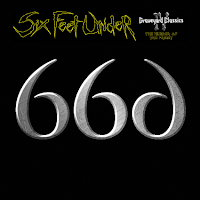 Whether or not that's the case we couldn't give a flying shit, because this is just excellent. To test whether it was really as good as we thought, we played the version of 'Murders In The Rue Morgue' to one of the editorial team who is an avowed Maiden devotee. Their laughter when Barnes' vocal kicked in was immediately replaced by a bout of headbanging. A ringing endorsement!

Of course, this all comes under the title of novelty, but that doesn't detract from the sheer enjoyment of the extraordinary renditions on display here.

Musically they're pretty faithful to the originals, with subtle twists here and there for purists to listen and smile Ray Suhy's work on guitar and bass has a lightness of touch given how heavy the delivery is, while Josh Hall's drums must have been a challenge given how many different drummers' styles he had to master.

There is no doubt that the aforementioned track 'Murders In The Rue Morgue' is the stand-out track, closely followed by 'Prowler' and 'Night Crawler'.

While some of the tracks on Graveyard Classics sometimes seemed flat, on IV one senses that these were formative tracks in Barnes' metal journey, tracks that were etched into his mind as he began the journey that led to Cannibal Corpse and Six Feet Under.

Sounding rather ebullient Barnes had to say (excuse the obvious hyperbole):

"Get ready to have your ears violated and your mind blown! 'Graveyard Classics IV: The Number of the Priest' just crawled out of the Heavy Metal Cemetery! Having a good time playing music is what it's always been about since day one, and that's what the 'Graveyard Classics' albums are to me... a good fucking time! I hope you all enjoy our twist on these legendary songs!"

Graveyard Classics IV: The Number of the Priest was produced by Chris Barnes and Phil Hall. Drums were tracked by Josh Hall at A.O.P. studios, and all other instruments were tracked by Ray Suhy at Cessation Engine Studios. Vocals were recorded by Carson Lehman at The Loft in Seattle, WA. The album was mixed by Jesse Kirkbride at Kirkbride Recordings in Cape Coral, FL and mastered by Alan Douches at West Westside Music.