ALBUM REVIEW: All turning great on The Grinding Wheel for Overkill's 18th outing

IT seems that the idea of thrash has gotten way far away from what it was when it was birthed into the unholy decade of the 80s. That's no bad thing, as everything can and must evolve. But one band have never truly deviated from the thrash origins - Overkill.

And, on 'The Grinding Wheel' the band have taken the original template, smashed it into a smelting pot of sheer thrash glory - you got your NWOBHM, classic metal, speed and punk influences rolled into 10 neck achingly good tracks.

Bracketed by 7:30 opener 'Mean Green Killing Machine' and the almost eight minute closer and title track this is chock full of songs that leave you smiling, and if driving while playing it you do run the risk of exceeding the speed limit.

Not that it adheres to anything other than Overkill, the mixture of fast, slow, well thought out time changes and arrangements.

There are some wonderfully exquisite guitar sections from Dave Linsk's lead work, such as at the close of 'Shine On' and on the intro to 'The Long Road' (spot the doff of the cap to Maiden here).

However, what allows this to be a truly exceptional piece of work is the furious rhythm pieces slotted in. DD Verni's bass, Derek Tailer's rhythm guitar and Ron Lipnicki's drumming.

Indeed it is Lipnicki's work that holds many of the tracks together, as well  as adding flourishes and fills that are almost lyrical.

But, of course it's Bobby 'Blitz' Ellsworth who provides the gel that holds their belief system together as a 'blue-collar' thrash band. 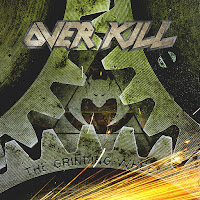 He explains many of the concepts behind the thoughts going into the album.

"One of the principles - if not characteristics - of the band is that it's been grinding through for long, long periods of time," said Ellsworth. " Decades to this point. And, not necessarily with huge gains with regards to popularity, but for sure with huge gains in as much as we can earn a living while doing the kind of music that we want.

"And, so the idea of grinding it out over the decades became a device for writing the album, whether it would be riffs or lyrics".

He may now be a self-confessed mature human at 57-years-old but his enthusiasm oozes from every word, whether they are metaphorical or casting a witty, cynical eye on this dystopian reality.

Whether it is the war cry to band as one people with common vision in metal or philosophy on the phenomenal 'Our Finest Hour', or the rigours and enjoyment of earning a living as a band on 'The Wheel' he still turns a phrase to delight.

However, one piece stands out amongst many great moments - the sensational 'Let's All Go To Hades'. "When all you want to do is fucking scream, when all the world has gone insane"

It's his reaction to the Bataclan massacre and Lemmy's death - it's a fuck it all, we're not going to back down, there are still those willing to play and journey across this troubled continent. Having fun this is a tongue-in-cheek' chunk of defiance - as DD says "It got a little bit of fun in it".

That's not to say he ignores the US' political landscape such as on 'Red White and Blue'.

Abstract or literal he nails it every time.

It's hard to think that Overkill first rose to prominence in '85 with the Megaforce release of 'Feel the Fire' and still sound so fresh, so angered, yet gathering humour and a tight sound.

Produced by Overkill themselves the mix by Andy Sneap makes it all 'pop' in just the right way.

From 'Ironbound' to 'White Devil Armory' this evolution, if you like, of the second incarnation of Overkill's success. It almost feels as if they have reached out and touched something magical and unleashed an album that has an alchemist's touch, an elixir composed of Maiden, Sabbath, Priest, thrash, old school punk and musical excellence to produce the rare element of great metal

The Grinding Wheel is released via Nuclear Blast on 10th February, 2017